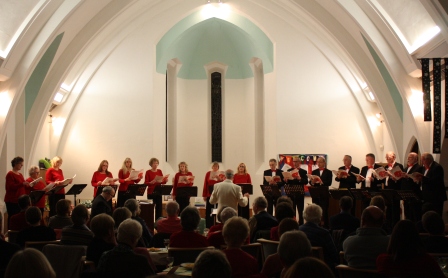 Carols for CLIC Sargent in Maidstone

Members of The Maidstone Singers took part in a nationwide ‘Carols for CLIC’ fundraising event in December to help raise money for CLIC Sargent, the UK’s leading childrens’ cancer charity. 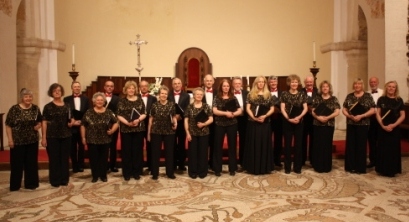 The Maidstone Singers gave three concerts on their tour of Solento in the ‘heel’ of Italy in April this year, firstly in the beautiful Basilica Cattedrale in the seaside town of Otranto and then, togther with the university choir, Il Coro polifonico dell’Universita del Solento, in the Chiesa del Rosario in Lecce. The tour ended in the Cattedrale di Santa Maria Assunta in the white-walled hilltop town of Ostuni. The Singers’ repertoire of mainly English and American sacred music, both ancient and modern, was supplemented by a number of pieces by Italian and other composers. The tour featured the choir’s first performance of Eric Whitacre’s emotional tour de force, ‘When David heard’, which looks set to become a regular item for the choir. Their harmonious, professional a capella singing led to their hosts describing them as having ‘the voices of angels’, a fitting accolade for a choir that goes from strength to strength. Maidstone can feel rightly proud of its musical ambassadors to Europe.

Of course, no tour is entirely hard work and the choir took their opportunities to relax and enjoy this beautiful part of the world and the friendly welcome of all those who sang with them and who came to the concerts. The Puglian countryside and its beautiful sandy beaches are still largely untouched by tourism compared to much of Italy and its food is second to none. Its Baroque architecture in towns like Lecce and Martina Franca is perhaps the best in Europe. We would all welcome the opportunity to return in the future. 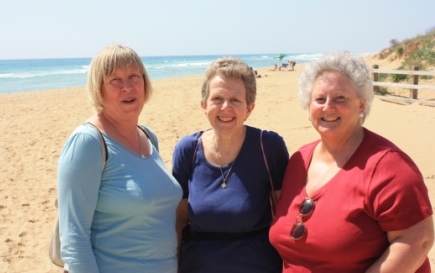 ‘Rehearsal? What rehearsal?’ As members of the ladies’ sections relax on the beach!

Carols with the Maidstone Singers 2011

At the Bearsted Farmers’ Market 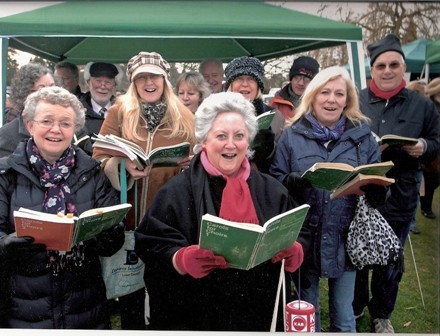 Our joint Autumn concert with the Eindhoven Vocal Ensemble took place on Saturday 22nd October at All Saints Church, Maidstone and comprised the following works under the joint musical directorship of Ruud Huijbregts and Jeffrey Vaughan Martin:

This challenging programme demonstrated to the full the many and varied talents of both choirs and of the brass ensemble as they filled All Saints with a varied selection of music designed to cater to all tastes. Those pieces sung jointly by the two choirs provided powerful evidence of the outstanding results of an on-going collaboration which will no doubt continue to delight audiences in Maidstone and Eindhoven.

Many comments of appreciation have been received subsequently from members of the audience, including for example:

We want to send our congratulations on an absolutely brilliant concert at All Saints on Saturday Evening. It was a splendidly chosen programme and very well sung by everybody. Indeed, we both agreed that it was one of the best choral concerts that we’d ever been to – so, well done to everybody.”

Polish-ed performance! – our tour of Poland in April 2011

The Maidstone Singers were delighted by the warmth of the reception they received on their tour of Poland in April this year, both from the enthusiastic audiences and from the two host choirs. Performances in Krakow and Przemysl were met by standing ovations from lovers of choral music who attended the four concerts.

In Krakow a joint performance with the excellent Parafraza Chamber Choir, was held in the Church of St Peter and St Paul. Comprising a range of music with a religious theme in the period before Easter, it included appropriately Gorecki’s ‘TotusTuus’ as well as a performance of Bob Chilcott’s ‘Little Jazz Mass’ with instrumental accompaniment.

A video of us performing Little Jazz Mass:

A video of us performing Gorecki’s ‘Most Holy Mother:

Parafraza’s conductor and artistic director Iwona Gruszczak is on the right of the photograph and Jeffrey Vaughan Martin on the left. 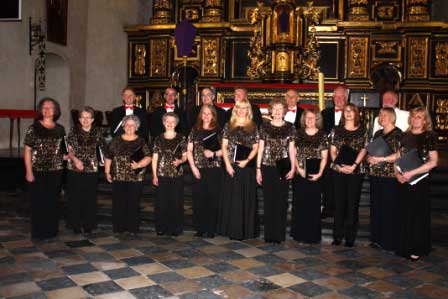 In Przemysl, in the south of the country close to the Ukrainian border, nothing was too much for the Przemysl Chamber Choir (thanks to Malgorzata in particular!) who arranged trips and a party for us as well as setting up the concerts with professional staging, lighting and recording facilities to magnificent effect. The Maidstone Singers gave a concert of European and American Music in the beautiful Silesian Church and there was a joint concert with the Przemysl Chamber Choir in the Cathedral Basilica of the Assumption and St John the Baptist including once again the Gorecki and also Karl Jenkins’ ‘Stabat Mater’. The Jenkins, with orchestral accompaniment, was crowned by a bravura performance from our soloist, Stephanie Crooks. The piece received a standing ovation from an audience which exceeded the seating capacity of the cathedral and clearly warmed to the British composer. The Przemysl choir and orchestra and The Maidstone Singers were rightly pleased with their successful co-operation. 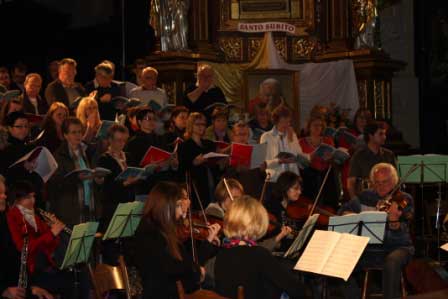 In rehearsal in Przemysl – with Pope John Paul listening intently 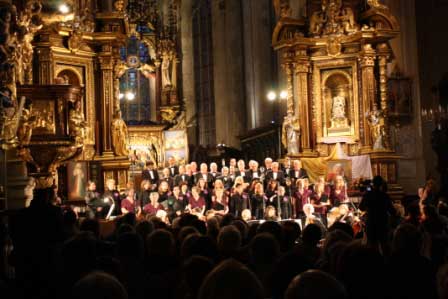 The packed Cathedral Basilica in Przemysl

Trip to The Netherlands 2010

Between 23rd and 26th September 2010. We were the guests of the Eindhoven Vocal Ensemble (EVE). The phrase ‘going Dutch’ took on a whole new meaning; our hosts treated us to every aspect of their hospitality. We gave our first concert in Emanuel Church, Eindhoven, followed by a rehearsal with our

Dutch friends. giving us all the opportunity to get to know each other and talk about our various musical experiences. We were given the opportunity to visit nearby Utrecht for the day, accompanied by Barend, the Director of the Veldhoven Music School. The day included a visit to the Museum of Music, where we were given a guided tour demonstrating all the amazing organs. Our main concert took place in St Catherine’s Church, Eindhoven, a beautiful church with spectacular stained glass windows, depicting biblical scenes. Following the rehearsal, many of us took the opportunity to climb the bell tower and see the stunning views from the top. Our Music director was even given the chance to play the carillon of bells! The concert itself – a performance of Karl Jenkins’ ‘Stabat Mater’ – was nothing short of magical, both for the singers, the orchestra and our appreciative audience. Our soprano soloist, Stephanie Crooks, brought out every emotion with her performance of all the varied styles required by the work. By the end of the evening we had all been captivated by the power of the music – even our Music Director who missed out a whole page of the score! The whole trip was a fine example of the ability of music to unite musicians and music lovers of all nationalities and backgrounds. We very much look forward to the next trip to Poland in April 2011. 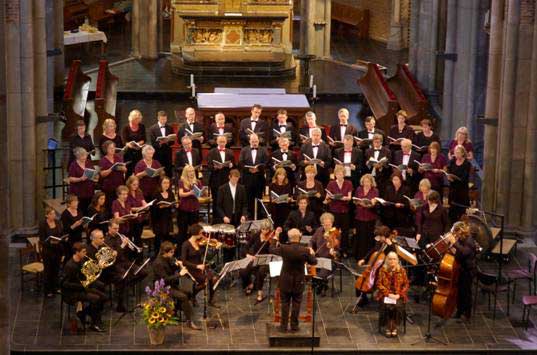 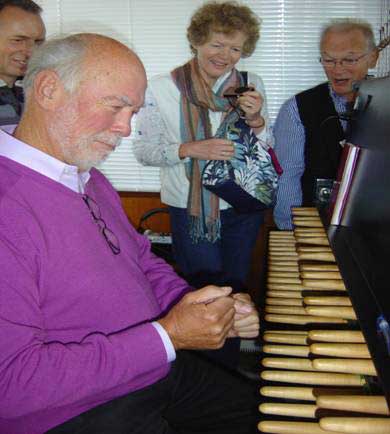 Our Music Director tries out the carillon at St Catherine’s Church, Eindhoven

The tour to Croatia in April 2010 was a great success for The Maidstone Singers and a most enjoyable one for all us groupies. As usual, Jeffrey and Jane pushed the choir to its limits, not only musically but also in terms of stamina. Concerts in the beautiful old capital city of Varazdin and then across the Slovenian border in nearby Maribor were followed by a 200 mile journey to the Istrian peninsular where the choir sang in the Basilica in Porec and then by invitation of the Vrsar choir in their beautiful church. We also serve who only stand and wait, but in addition we get the best of the local culture and entertainment and we can enjoy the most sublime choral music! 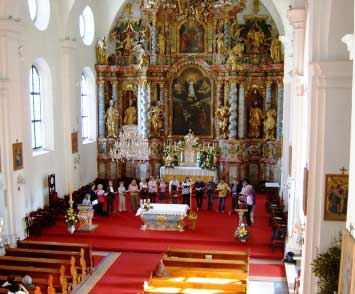 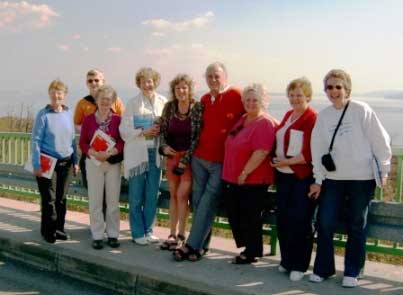 En route to Porec with that holiday feeling. 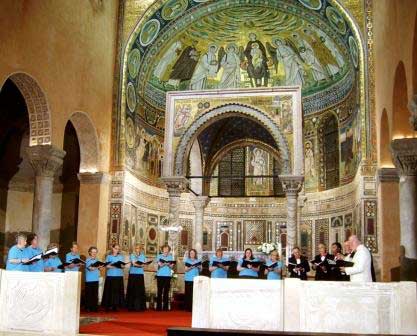 The wonderful Basilica in Porec, a highlight of the tour. 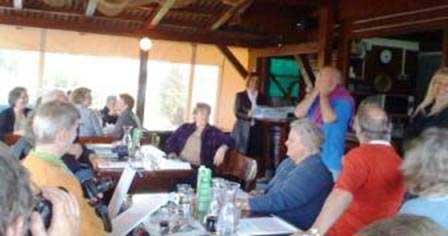 A party given by the Vrsar choir.

Jeffrey still can’t pronounce these Croatian town names but he certainly knows how to make friends.